Kakadu National Park is a living cultural landscape with exceptional natural and cultural values. Kakadu has been home to Aboriginal people for more than 50,000 years, and many of the park’s extensive rock art sites date back thousands of years. Kakadu’s rock art provides a window into human civilisation in the days before the last ice age. Detailed paintings reveal insights into hunting and gathering practices, social structure and ritual ceremonies of Indigenous societies from the Pleistocene Epoch until the present.

The largest national park in Australia and one of the largest in the world’s tropics, Kakadu preserves the greatest variety of ecosystems on the Australian continent including extensive areas of savanna woodlands, open forest, floodplains, mangroves, tidal mudflats, coastal areas and monsoon forests. The park also has a huge diversity of flora and is one of the least impacted areas of the northern part of the Australian continent. Its spectacular scenery includes landscapes of arresting beauty, with escarpments up to 330 metres high extending in a jagged and unbroken line for hundreds of kilometres.


The hunting-and-gathering tradition demonstrated in the art and archaeological record is a living anthropological tradition that continues today, which is rare for hunting-and-gathering societies worldwide. Australian and global comparisons indicate that the large number and diversity of features of anthropological, art and archaeological sites (many of which include all three site types), and the quality of preservation, is exceptional.

Many of the art and archaeological sites of the park are thousands of years old, showing a continuous temporal span of the hunting and gathering tradition from the Pleistocene Era until the present. While these sites exhibit great diversity, both in space and through time, the overwhelming picture is also one of a continuous cultural development.

Criterion (i) : Kakadu’s art sites represent a unique artistic achievement because of the wide range of styles used, the large number and density of sites and the delicate and detailed depiction of a wide range of human figures and identifiable animal species, including animals long-extinct.

Criterion (vi) : The rock art and archaeological record is an exceptional source of evidence for social and ritual activities associated with hunting and gathering traditions of Aboriginal people from the Pleistocene era until the present day.


Criterion (vii) : Kakadu National Park contains a remarkable contrast between the internationally recognised Ramsar–listed wetlands and the spectacular rocky escarpment and its outliers. The vast expanse of wetlands to the north of the park extends over tens of kilometres and provides habitat for millions of waterbirds. The escarpment consists of vertical and stepped cliff faces up to 330 metres high and extends in a jagged and unbroken line for hundreds of kilometres. The plateau areas behind the escarpment are inaccessible by vehicle and contain large areas with no human infrastructure and limited public access. The views from the plateau are breathtaking.

The Kakadu region has had relatively little impact from European settlement, in comparison with much of the Australian continent. With extensive and relatively unmodified natural vegetation and largely intact faunal composition, the park provides a unique opportunity to investigate large-scale evolutionary processes in a relatively intact landscape.


Kakadu’s indigenous communities and their myriad rock art and archaeological sites represent an outstanding example of humankind’s interaction with the natural environment.

Criterion (x) : The park is unique in protecting almost the entire catchment of a large tropical river and has one of the widest ranges of habitats and greatest number of species documented of any comparable area in tropical northern Australia. Kakadu’s large size, diversity of habitats and limited impact from European settlement has resulted in the protection and conservation of many significant habitats and species.

The property protects an extraordinary number of plant and animal species including over one third of Australia’s bird species, one quarter of Australia’s land mammals and an exceptionally high number of reptile, frog and fish species. Huge concentrations of waterbirds make seasonal use of the park’s extensive coastal floodplains.

The property encompasses all the natural and cultural attributes necessary to convey its outstanding universal value. The joint management regime in place with Kakadu’s Indigenous owners, including consideration of grazing and the development of a controlled burning and management policy, significant research and monitoring activities, and a strong visitor education programme are essential to the maintenance of the integrity of the property. The rock art and archaeological sites are not under threat.


The natural attributes of the property are in good condition, with pressures from adjacent land uses, invasive species and tourism needing ongoing attention.  Some past land degradation from small-scale mining and over-stocking that occurred in the area that was included in the property in 1992 has been addressed through restoration measures.

As is the case for many protected areas, the straight-line boundaries of Kakadu are artificial ones.  They relate to a long history of administrative land use decisions with the Northern Territory Government and the Arnhem Land aboriginal reservation.  Although the South Alligator River drainage basin is contained within the park, headwaters of other rivers lie outside.  The boundaries are adequate, although in an ideal world, ecological/hydrological criteria would allow a different configuration and might also include the drainage basin of the East Alligator River in Arnhem Land which would add additional values and integrity to Kakadu.  There are also important natural values in the Cobourg Peninsula and in some of the coastal wetlands to the west of the park.

There are mining interests adjacent to the property, and the long-term aspects of waste disposal and eventual recovery required ongoing attention and scrutiny.  In addition to the uranium mine at Ranger, which is excised from the property, there is one other excised lease at Jabiluka which is located close to an important floodplain inside the park.  A third previously excised area at Koongarra was incorporated into the property in 2011, at the request of the State Party and the Traditional Owner.

The property is well protected by legislation and is co-managed with the Aboriginal traditional owners, which is an essential aspect of the management system. The Director of National Parks performs functions and exercises powers under the Environment Protection and Biodiversity Conservation Act 1999 (the Act) in accordance with the park’s management plan and relevant decisions of the Kakadu National Park Board of Management. A majority of Board members represent the park’s traditional owners. These arrangements ensure that the park has effective legal protection, a sound planning framework and that management issues are addressed.

The quality of the park’s management and protection has been widely recognised. Key management issues that have been identified include:

Tourism – significant increase in visitation as a result of its World Heritage inscription. Visitors are encouraged to enjoy the park in ways that do not adversely affect its natural and cultural values;

Mining – management of abandoned small-scale uranium mining sites and monitoring the existing Ranger mine lease. A rehabilitation program has been completed to reduce the physical and radiological hazards of old mine sites. The future potential effects on the park of current uranium mining will require ongoing scrutiny;

Introduced flora – ongoing management to control and prevent the spread of introduced weeds (particularly Mimosa pigra and Salvinia molesta); and

Since the 1991 nomination, additional threats to World Heritage values have emerged, including:

Climate change – saltwater incursions into freshwater ecosystems, changing fire seasons and regimes and an increased potential for spread of exotic flora and fauna. Park managers are implementing a climate change strategy for the park that recommends a range of adaptation, mitigation and communication actions to manage the anticipated consequences of climate change;

Decline of small mammals across northern Australia – the causes of decline are unclear however initial theories suggest fire management regimes, feral cats and introduction of disease as the likely causes; and

Cane Toads – rapid colonisation by cane toads. Monitoring programmes are in place to determine cane toad distribution and the impacts on native wildlife within different habitats of the park. There are no known methods to manage populations of cane toads over large areas; however the Australian Government is undertaking research into potential control and adaptation options. 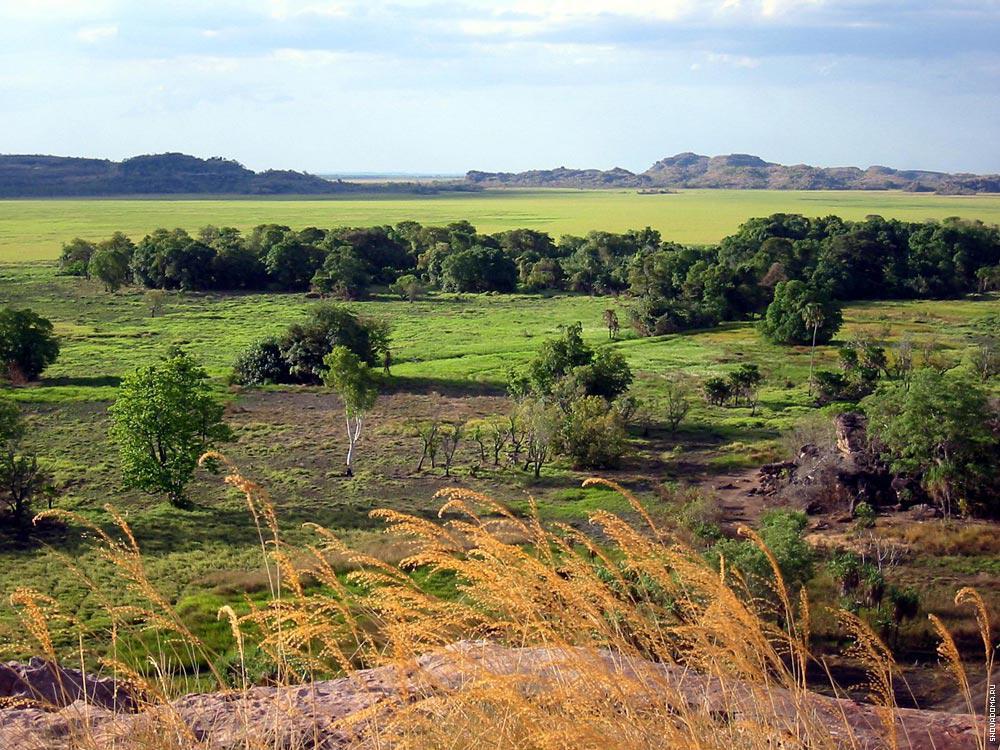 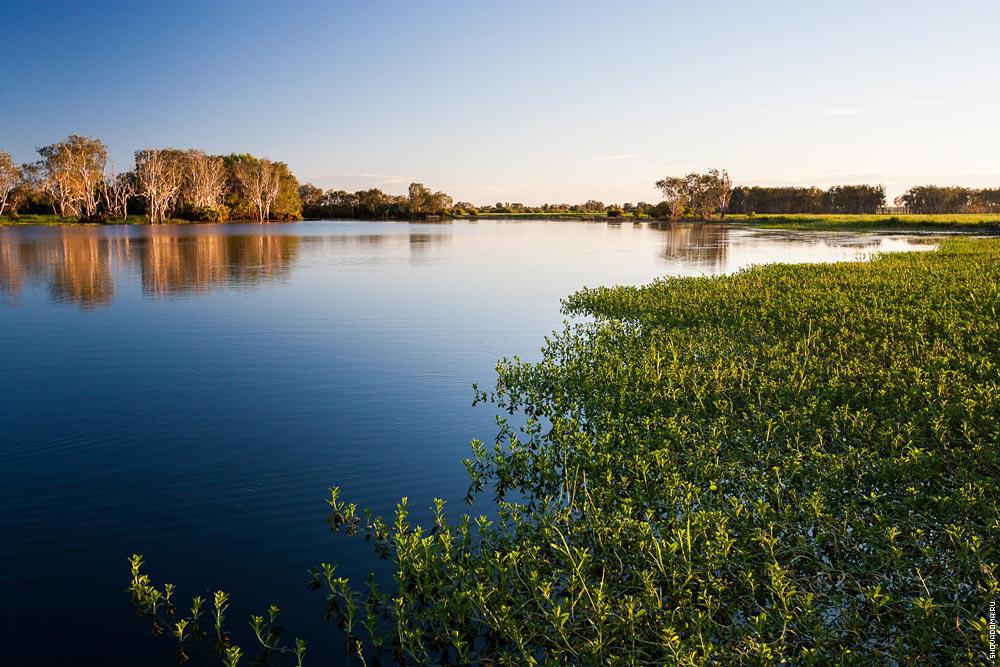